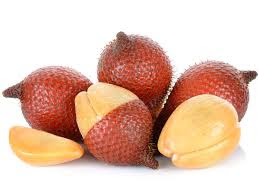 Salak is one of popular fruit in Bali, Salak is a type of palm fruit commonly eaten. He is also known as sisik ular. In English is called bark or snake fruit, while its scientific name is Salacca zalacca. This fruit is called snake fruit because its skin is similar to snake scales.

At a morning market in Bali, the usual gaudy suspects – papayas, mangos, dragon fruit and heaps of rancid-smelling durians - are on display. For Western visitors seeking culinary novelty, however, the most enticing fruit likely will not be the biggest or the brightest, but a humble, shiny brown offering called the salak. For the uninitiated, this fleshy, spongey morsel offers a perfumed cocktail of bright flavors, with hints of pineapple, citrus, honey and possibly even soap.

In Indonesia, salaks are as common as apples or oranges in the U.S. Also called snakefruit, this strawberry-sized, fig-shaped fruit comes encased in vivid, nutty-brown scales, not unlike that of a cobra or python. Heaps of salaks turn up daily at countless local markets, while touristy hotels offer them up in breakfast buffet lines as examples of typical island fare. The odd but ubiquitous morsels can be boiled with sugar into a sweet spread, pickled, vacuum dried and fried into chips or paired with other fruits and nuts, but locals prefer them best raw and straight off the tree. 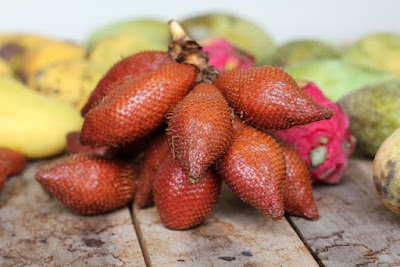 Around 30 types of snakefruits grow throughout their native Indonesia, but the islands of Bali and Java vie for the best salak around. Naturally, locals tend to swear by their own island fruit’s superiority, but for foreigners all bets are off, and preference is simply a matter of taste. The Javanese variety, or salak pondoh,  is the more obnoxiously aromatic of the two varieties. This intense fruit walks a fine line of ripeness that is so volatile that it will often become overripe and sweaty even before it reaches maturation. 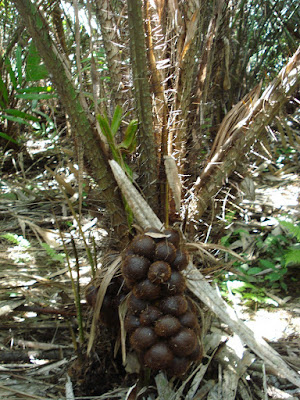 In Bali, salak bali delivers a crunchy, starchy experience that conjures associations with watery pineapple and lemon. One strain of extra small, extra sweet salak bali called gula pasir (“sand sugar”), fetches the highest price on the island, ranging from 75 cents to $1.50 per pound, depending on the season. These little morsels also ferment into salak wine, a sweet, dry concoction of honey-gold that contains 13.5 percent alcohol. Family-owned wineries chop the mature fruits and pack them into containers to brew with sugars and yeast for two weeks. From there, they press the wine to remove sediments, a process that takes about six months. Around 9 pounds of fruit make one bottle of wine that sells for $10, so salak farmers who stick to the bottle are able to spin a better profit than those like Monsaro who sell their fruits fresh off the bush.
di 11:19 PM