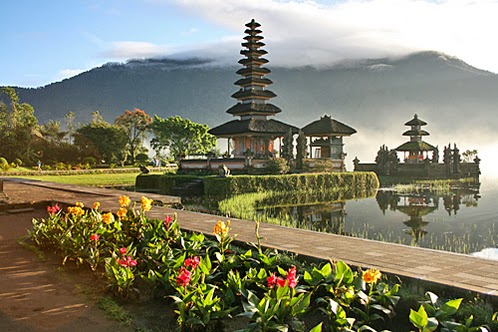 Pura Ulundanu Berata Temple or Pura Bratan, is major shivaite and water temple on Bali, Indonesia. the temple complex is located on the shores of lake Bratan in the mountains near Bedugul. Water temple serve the entre region in the outflow area, downstream there are many smaller water temples that are specific to each irrigation association. 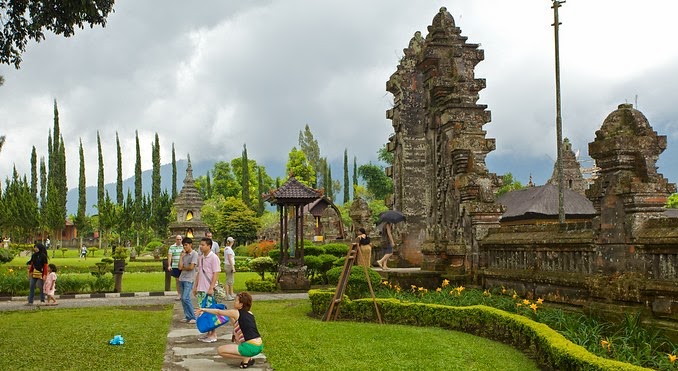 Specifically The temple located iat Candikuning countryside, Baturiti sub distric and Tabanan regency. The distance from Denpasar town is about 50km north side the way from Denpasar to Singaraja. It is set at lakeside of Beratan with beautiful lake view and hills surround it. It is situated in the plateau area with cold atmosphere surround it and hills backdrop. We can find at north side of this temple is Puncak Sangkur mount, in the eastside there is Beratan Mount witch also referred as Pucak Mangu or Pucak Pangelengan, in the south side there is Terate Bang Mount and in the Westside there Tapak Mount and Watukaru Mount.

The Story And Philosophy
Name of Ulundanu Beratan Temple is taken from the lake where the temple is built at Berata Lake. Yhe name of Beratan Lake is inseparable with the Beratan mount as Deity and Goddess as fertility source, prosperity to keep the prosperity in the life and society life. In papyrus chronicle of the Mengui, this temple is referred as the name of Parhyangan ring Pinggiring danu Beratan ( Sabctum Located in the lake of beratan lake). Ulun is come from Hindu word Hulu word meaning head or power and in this case is intended by Ulun Danu Beratan power of Beratan Lake that is Danu Goddess.

Ulun Danu Beratan Temple is Consist of 4 Temples complex that are :
-- Lingga Petak Temple owns the funtion to worship the Siwa (Siva ) God
-- Penataran Puncak Mangu Temple is Referred this as Parahyangan ri Pinggiring rawa Beratan or Danu Beratan Temple is Founded by I GUsti Agung Putu to worship the Hyang ing Parwata or Deity witch is placed in Pucak Mangu that is Baratha Hyang Danawa as according to papyrus of Padma Bhuawana and Usana Bali, because Mangu Mount is located in North direction, hence it is called the Bhatara Hyang Danawa or Wisnu God.
-- Terate Bang Temple is Functioning to worship of Brahma God.
Dalem Purwa Temple is Functioning to worship of Danu Goddes which is considered to be miraculous ot the Bhatara Hyang Danawa or Laksmi Goddess. 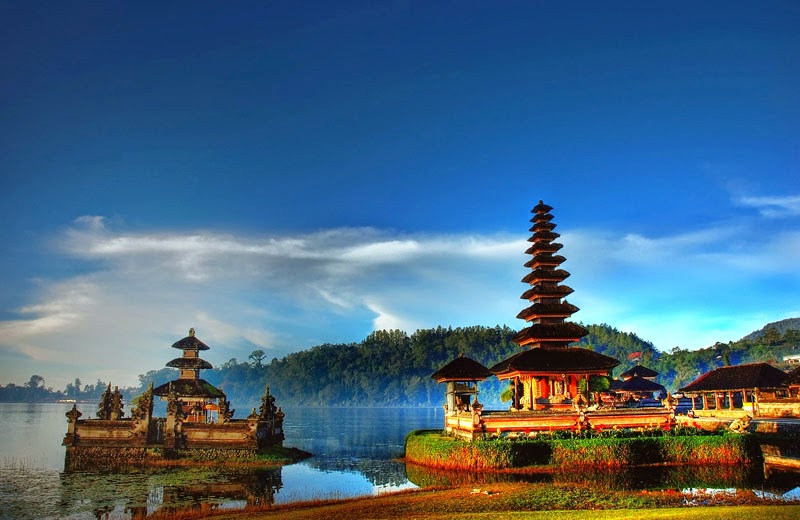 In Papyrus Chronicle of the Mengui is elaborated by the history of Ulun Danu Beratan Temple founding together with existence of the Mengui Empire. Therefore its status is pertained with the secondhand of The Temple Empire what is usually pertained as Dang Kahyangan. It is the same to the papyrus of Usana Bali and Padma Bhuwana, hence Puncak Mangu Temple where the Parahyangan (Representative place to worship) is the Ulun Danu Beratan Temple. So it is called by entire Balinese Residence as Kahyangan Jagat (The Biggest Group of Hindu Temple in Bali)

Temple Ceremony ,
The Temple ceremony execution at Ulundanu Beratan Temple is Considered of two types those are :
---- The Temple ceremony which is execute avery six-month (210 days) that on Anggara (Twesday) kliwon Julungwangi (base on Balinese Hindu calendar), every 12 month (420 days) is execute by bigger ceremony from the ordinary ceremony, so called piodalan Agung.
---- Pakelem Ceremony is execute at any time as cheapness to situation and conditions.
di 12:22 PM