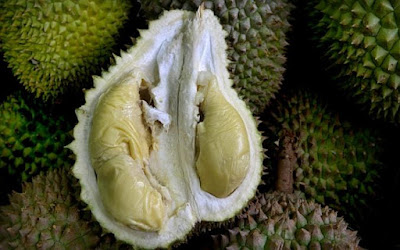 Durian on of the several fruit available in Bali, it is look like jack fruit but smaller, smell are strong, some of the people doesn't like the smell. Also if you bought one and will bring to the hotel room it is forbidden cause of the strong smell.

Durian fruit is not noted for having a particularly appealing fragrance, but it its many beneficial attributes have earned it the “King of Tropical Fruit” title. Coming from one of the 30 recognized Durio species (at least nine of which produce edible fruit), durian is popular both in the local communities where it is grown, and on the thriving international market.

Durian is extensively grown in tropical regions, with countries like Indonesia, Thailand, Malaysia, and the Philippines as major producers. The tree also grows in northern Australia, some South American countries, and Africa. 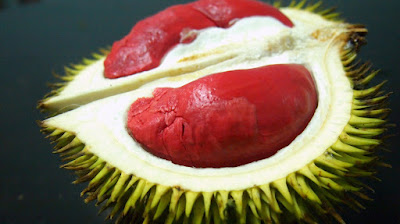 Durian is distinguished for its strong odor, large size, and thorn-covered husk. It can grow as large as 12 inches long and 6 inches in diameter, and typically weighs up two to seven pounds. Depending on the species, it can be round or oblong, its husk green to brown, and its flesh pale yellow to red. The tree starts to bear fruit four to five years after planting, and it grows up to 164 feet. 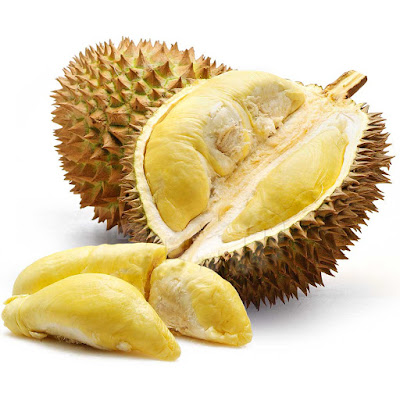 A seasonal fruit, durian lasts typically from June to August, coinciding with the season of other tropical fruits such as mango, mangosteen, and jackfruit. The smell of the durian fruit – reputed to be the foulest in the world – deserves a writeup all its own! The distinctive odor emitted by the edible flesh is strong and invasive even when the husk is intact. Many Asians compare it to that of a perfume, while foreigners coined the saying “smells like hell and tastes like heaven.” The unusual, overpowering odor elicits a wide range of reactions, from appreciation to downright disgust. But what does durian offer on the nutritional front? Plenty, and there are many ways to enjoy it during your meals.
di 2:24 PM