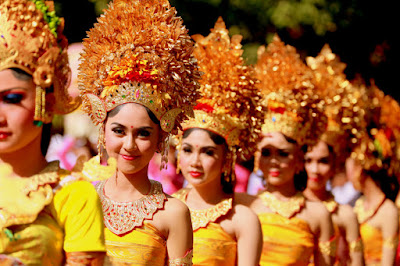 Balinese traditional outfit comes with various mode based on male and female style such as ‘kebaya’, ‘udeng’, ‘kamen’, ‘safari’, and many more. For those of you who just want to make Balinese cloth in special tailor, you can buy some fabric material in any Balinese fashion shop in Denpasar.

Balinese love to buy fabric material then make the cloth in special tailor to get a perfect outfit. For note, Balinese male and woman absolutely have different characteristic of traditional fashion. Nowadays, traditional Balinese outfit has followed the modern trend. There are so many modification and new creation that makes traditional outfit looks so luxury, elegant and fabulous. 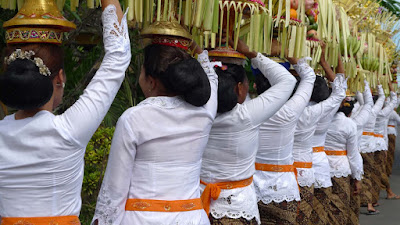 The kebaya, worn by women for all religious ceremonies and weddings, comprises a long, fitted blouse made either of semi-transparent lace with a corset worn underneath, or of a sheer cotton decoratively embroidered. This is worn over an ankle-length kain (a long, wide rectangular length of fabric, tied at the waist) or a sarong (a rectangle of fabric with the ends sewn together to form a tube), often with high-heeled sandals.

Hair is sleekly pulled back, flowers are worn in the hair, and the finishing touch is a sash that’s fixed around the waist. Different traditions dictate how the sarong and sash should be tied.

Like the women, men also wear a kain or sarong – often in browns and blacks or muted tones – with a sash, tied to create folds at the front, along with a shirt (normally plain in colour) and a head-dress called an ‘udeng’. 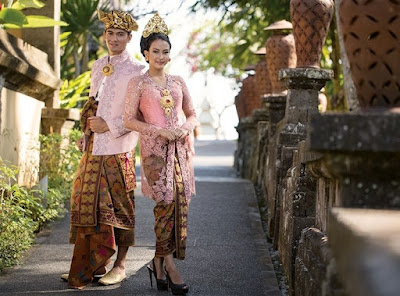 Different kinds of fabric indicate the wealth and status of the wearer. Batik is the most popular for sarongs for both men and women, but ikat is also worn. Sometimes the men also wear a ‘kris’ or specially crafted silver dagger, as part of their ceremonial dress – the kris is believed to be sacred, having magical powers.
di 3:12 AM